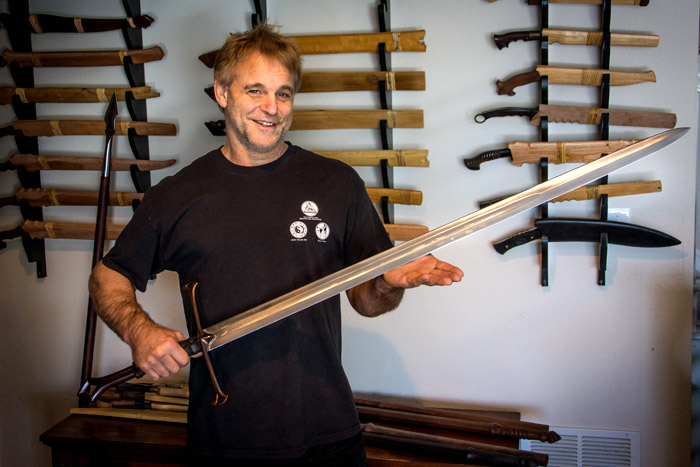 Ron’s first experience with martial arts was when he lived in an apartment complex going back between 1967-69. His next door neighbor, who was a black belt in Tang Soo Do, claimed to get his instruction in Korea. He gathered a few kids in the neighborhood and taught them right outside of his apartment. They would practice the Katas and point sparring, which was the way to practice their fighting, in that particular style. He used to make Ron do knuckle push-ups on cement and then punch trees or the side of a brick building. Ron thought that one day he would have the punch from hell, believing this was the way to harden his hands and create a powerful punch. Nowadays of course, everyone knows that this isn’t exactly how to go about having a good punch or any type of strike for that matter.

In the mid 70’s, Ron had met a man that would change his life forever. That man was the late Joe Rossi, Grand Master of a Filipino martial art called “Kuntao”. When Ron first went in to watch a class and he saw one of Mr. Rossi’s students was putting a headlock on him, then Mr. Rossi was demonstrating how to escape it. The guy putting the headlock on looked like he wasn’t administering it with any kind of effort, so Ron asked if he could put him in a ‘real headlock.’ Of course, Ron assumed this old man would have no chance of escaping it, especially since he had used it successfully in many street fights, previous to this encounter.

Ron put the headlock on this Kuntao master with full force and the next thing he knew was he was on the ground, head first with his face into the ground and pain coming from his shoulder, elbow and wrist with his fingers bent back all the way. Unsatisfied, Ron asked if he could do it again. This time assuming he could do it with more base and hold it much harder, so to prevent such an easy escape this time. A fully confident Mr. Rossi, obliged him to try again. Ron put it on harder trying to bring him down to the ground. Mr. Rossi again sent him face down on the floor with excruciating pain coming from his arm again, commanding complete control over him.

Ron had grown up in a housing project much of his early life and had been in many types of street fights. But never, at that time in his life came across anyone who could just move him around so easily and cause such excruciating pain with what looked like hardly any effort. This truly impressed Ron and after going through all that, without any hesitation, he joined The Rossi Academy of Self Defense. After that he maintained a very close relationship with his Kun Tao instructor for the next 25 years until Mr. Rossi’s death in November 8th 1998.

To order by phone, please have your Credit Card information ready.